But, as with any sport, there are some safety concerns to be aware of. One of the uncommon trouble you might face when mountain biking is spoke braking.

Now the question most of you all get is, can you ride a mountain bike with a broken spoke?

The answer is you can ride your mountain bike with a broken spoke, but it’s not going to be fun. A broken spoke can cause the wheel to wobble and make riding difficult.

So, what do you think about riding a mountain bike with a broken spoke?

Read this article to find out more about bike spokes, their purpose, how they get damaged, and further facts about how to care for your bike spokes. 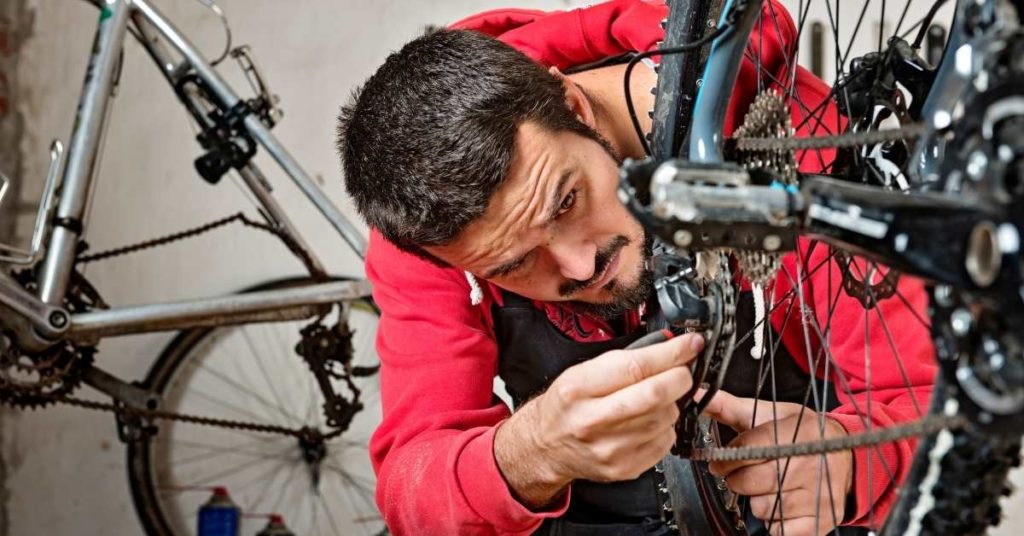 Can I Really Ride my Mountain Bike With a Broken Spoke?

If you’ve ever broken a spoke on your mountain bike, you know it can be a real pain.

Not only is it annoying and inconvenient, but it can also be dangerous. So, the question is, can you really ride your mountain bike with a broken spoke?

The answer is yes… but it’s not advisable. While you can technically ride your bike with a broken spoke, it’s not going to be safe or fun.

The spoke is there for a reason – to support the wheel and keep it true. Without a spoke, the wheel will be weaker and more likely to buckle or break. This can lead to a crash, which is obviously not something you want.

So, if you have a broken spoke, the best thing to do is to replace it as soon as possible. This isn’t always easy, especially if you’re out on the trail, but it’s important to make the repair as soon as you can.

What Are Bike Spoke & Their Function

Bike spokes are the metal rods that connect the outer rim of your wheel to the hub in the centre. They’re usually made of steel but can also be made of aluminium, titanium, or even carbon fibre.

The number of spokes on a wheel varies depending on the size and type of bike but typically ranges from 16-36.

While the hub and rim itself are generally quite strong, the joint where it meets the spoke is often the weakest point.

That’s why it’s important to keep an eye on your spokes and make sure they’re tight. If one breaks, it can cause the wheel to come out of true and make riding dangerous.

The function of bike spokes is to support the weight of the rider and transfer pedalling power to the wheel. Without them, your bike would be a lot less stable and much harder to ride.

So next time you’re out on a ride, take a moment to appreciate those little metal rods that are holding everything together!

Bike spokes can be damaged in a number of ways. The most common way is through impacts, such as hitting a pothole or curb. This can cause the spoke to bend or break.

Another way spokes can be damaged through corrosion. This can happen if the spoke comes into contact with salt water or chemicals. Over time, the corrosion can cause the spoke to weaken and break.

Finally, spokes can also be damaged by fatigue. This happens when the spoke is repeatedly flexed, such as when riding over rough roads. Eventually, the metal will fatigue and break.

To avoid damaging your bike spokes, it’s important to inspect them regularly and replace them if they show signs of wear.

How to Identify Whether Your Bike Spoke Are Broken?

The first thing you’ll want to do is inspect your bike’s wheels. If you see any spokes that are bent, broken, or missing, then your bike likely has a spoke issue.

Next, check to see if your wheel is true by spinning it and looking at it from the top. If the wheel wobbles back and forth, then it is probably not true, and you likely have a spoke issue.

If you’re still not sure, take your bike to a local bike shop and have them take a look. They’ll be able to tell you for sure if your bike has a spoke issue and can help fix it.

How to Fix a Broken Bike Spoke?

If you’re a regular cyclist, chances are you’ve broken a bike spoke at some point. While it’s not a major repair, it’s still something that needs to be fixed as soon as possible to avoid any further damage to your wheel.

– A replacement spoke (the same length as the broken one)

So, by following the above steps, you should have no problem fixing a broken bike spoke. Just remember to give your wheel a once-over before heading out on your next ride to be safe.

How Frequently Should You Check The Condition of Your Mountain Bike Spokes?

It’s important to keep an eye on the condition of your mountain bike spokes. Over time, they can become loose or even snap, which can cause serious problems while riding.

So how often should you check them? Ideally, you should give them a quick once-over before every ride. If you’re planning on a longer or more challenging ride, it’s a good idea to give them a more thorough inspection.

The Bad Impacts of a Broken Spoke

When you are out riding your bicycle, the last thing you want is for a spoke to break. Not only is it annoying, but it can also be dangerous.

While a broken spoke may not seem like a big deal, it can actually have some serious consequences. That’s why it’s important to be aware of the potential risks and take steps to avoid them.

Here are some of the most common problems that can occur when you have a broken spoke:

Do I Need to Especially Care about The Spokes of my Mountain Bike?

No, you don’t need to care for the spokes on your mountain bike, especially. However, it is important to keep an eye on them and make sure they are tight.

Over time, spokes can loosen and eventually break, which can cause serious problems. So check your spokes regularly and tighten them if necessary.

What can I do if my mountain bike spokes keep on breaking?

If your mountain bike spokes keep on breaking, it could be a sign that you need to have your wheel trued.

When spokes break, it’s usually because they’ve become warped or bent, which can cause them to rub against the hub or the rim and eventually snap.

If you’re not sure how to true your wheel, take it to a bike shop, and they should be able to do it for you.

How long can you ride a bike with broken spokes?

Maybe a day or two on smooth surfaces! A broken spoke significantly reduces the strength of the wheel and can cause it to break completely while you are riding, which can result in serious injuries. It is not recommended to ride a bike with broken spokes.

How much will it cost to replace a mountain bike spoke?

The cost of replacing a mountain bike spoke will vary depending on the type of spoke you need and the bicycle shop you take it to.

Most mountain bike spokes are made of steel, which is less expensive than other materials, but the price can still range from $0.50 to $1 per spoke.