Let’s be real — bike computers with small displays can be frustrating to read. Therefore, an efficient cycling computer needs to have a large display that is easy to view. With the largest display on the market, the CatEye Padrone Cycling Computers is one of the best cycling computing companions a rider can ask for. This is despite its lack of GPS functioning. 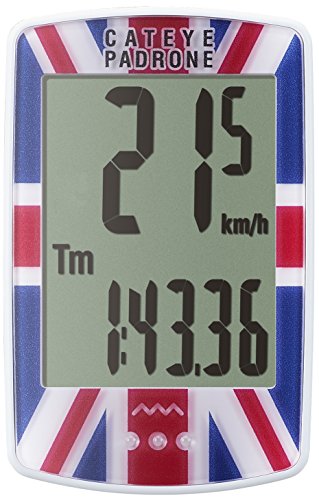 Although this gadget is quite big compared to other bike computers out there, it is not bulky as it weighs a meager 4.8 ounces. This makes it ideal for most bike types including cross bikes and mountain bikes. Below is the detailed CatEye Padrone Cycling Computers Review.

As already stated in the introductory paragraphs, the CatEye Padrone has the largest display available out there. This screen measures 43 mm in length and 32 mm in width. In addition to being large, the screen displays data in large fonts. This means that the display can only show a maximum of two stats at once. This is a good thing as information is not crammed onto the display making it difficult to read.

The CatEye Padrone is a sleek and well-built bike computer. Its large display dominates the front of the device. Thus, this bike computer has no buttons. Moreover, when compared to its wireless counterpart the Cateye urban wireless computer, it is 22% thinner.

Since this is an analog wireless bike computer, it needs to be mounted first. Towards this end, this machine is made up of three main components, the head unit which houses the display, a speed sensor and a magnet. Amazingly, mounting this gadget requires zero tools. Additionally, this device can be mounted on handlebars and stems of varying diameters. For ease of use, the Cateye Padrone has no buttons. To operate it, simply push the entire computer to navigate through the settings menu. This makes the pardon easy to use especially if you have thick gloves on.

The sensor and the main head unit are powered by CR 2032 batteries. The padrone displays standard information including current speed, total distance, elapsed time, trip distance, average and maximum speed. In addition to this, the computer is fitted with a clock and features a power saving mode. This machine also comes with a programmable odometer. To crown it all the Cateye Padron is accompanied by an instruction manual to guide you through the installation process.

Q: Is it possible to configure the display to show miles instead of kilometers?

A: yes, it is possible to change from kilometers to miles on the computer’s set up menu

Q: Can it show the number of calories burned?

A: No, unlike certain high-end bike computer models, this model does not have a heart rate function thus cannot show the number of calories burned.

Q: How is the computer mounted, with zip ties or is it screwed down?

A: The Cateye Padrone comes with a specialized zip tie that is used to mount it. Thus, it is important you zip in such a manner that you will be able to view it clearly. The zip ties used to attach this computer can be purchased separately when you want to use it with different bikes.

In conclusion, it is evident from this CatEye Padrone Cycling Computers Review that the Padrone is a great cycling computer. Its easy to mount and operate design gives it an edge over its pricier cousin the Urban Wireless Computer. Additionally, what this cycling computer lacks in GPS functionality it more than makes up for its large display. Therefore, this is one of the best, if not the best, cycling computers you can get in its price segment.

Our Recent Blog Posts
List of a Mountain Bike Parts – Guide to Important Parts and Components May 20, 2021
Exercises to Improve Strength for Mountain Biking January 30, 2021
Safety Tips for Riding an E-Bike For the Beginner January 28, 2021
7 Benefits Of Using Electric Bikes January 14, 2021
E-bikes and Possibility of Severe Injuries January 5, 2021
How to Choose Right Mountain Bike Fork – Buying Guide January 3, 2021
10 Factors You Should Consider Before Buying an Electric Bike December 31, 2020
Safety Guide For Women While Bike Riding December 29, 2020
Why Do You Need to Wear Proper Clothing While Cycling? December 21, 2020
How Electric Scooters are Transforming Cities? August 29, 2020