Evaluating the GT Men’s Aggressor Pro Mountain Bike – Is It for You?

Finding an affordable yet high quality mountain bike can be a long and difficult process, and with so many similar looking options out there it might seem overwhelming to try and identify the cream of the crop. The GT Aggressor Pro mountain bike is exactly that. Priced well below what it is worth, the GT men’s aggressor pro mountain bike is one of the absolute best entry level bikes that we have ever test ridden here at mountain bikes lab. Sold exclusively by Dicks Sporting Goods this high quality entry level bike is a joy to ride. Coming in four different frame sizes and equipped with high end Shimano components the GT Aggressor Pro is reliable, durable, and smooth on the trails. 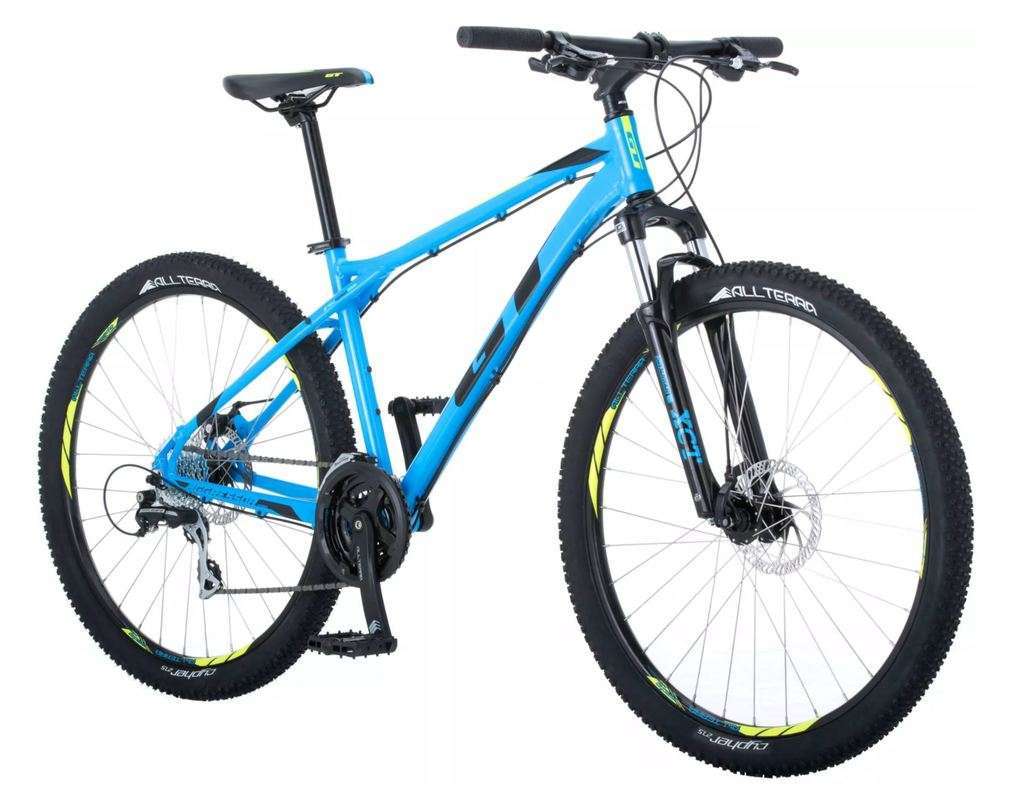 Overview – Our Experience at the Store

The first thing that came to mind when I walked out of Dick’s Sporting goods with my new GT Aggressor Pro mountain bike was that the bike had great potential. One of the best parts about buying an entry level bike at a store like Dick’s, as opposed to Amazon, Walmart or Target, is that Dicks has a bike mechanic on hand to help you set up your new bike. After picking out the GT Aggressor Pro mountain bike I was able to immediately bring it to their mechanic in store who then adjusted the entire bike to my unique specifications. For an entry level bike this is so great as it allows people with less experience to leave with a bike that is properly assembled and adjusted. Leaving Dicks with the GT Men’s Aggressor Pro that was expertly adjusted made me extremely optimistic about the potential for this mountain bike. Over the course of this review I will dive deep into my experience riding the GT Aggressor Pro in both the city and mountain trails of southern California, and hopefully leave you with everything you need to know to make an informed decision about whether or not to buy this mountain bike.

As I said earlier one of the difficulties with finding affordable entry level bikes is that often times these bikes are purchased from “big box” stores such as target, Walmart, and Amazon. While they are inexpensive, entry level bikes such as these much be self-assembled and will almost certainly not perform as well as a bike assembled and adjusted by a professional. After buying the GT Aggressor Pro and getting it adjusted by the bike mechanic at my local Dicks Sporting goods I took the bike home to go over its components. 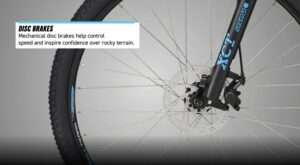 How Does it Stack Up Parts Wise?

Like with all entry level bikes the GT Aggressor Pro does not have the most high end components in the world, however I was pleased to see that there were some name brand elements mixed into the bike. For most entry level bikes the components used are almost exclusively non-name brand and are of far lower quality. Of all the components on a mountain bike our team would argue that the brakes, suspension and drive train are clearly the most important. These components are what enable you to actually ride you bike, and ride it safely. Thankfully, these are also some of the components that are made from name brand suppliers in the mountain biking industry. The GT Aggressor pro comes with a Suntour front suspension fork, Shimano shifters and drivetrain, and Tektro mechanical disc brakes.

If you are at all versed in the world of mountain bike you will have definitely heard the name Shimano before, and its possible you may even know Suntour and Tektro as well. Of all the companies that produce mountain biking components Shimano is far and away the most famous and well respected, however having name brand companies like Suntour and Tektro certainly adds credibility to the GT Aggressor Pro mountain bike. Before taking the bike out for a ride we tested the GT Aggressor pro on a bike stand to test the drivetrain and shifters. Although this was done at Dicks with the bike mechanic our team wanted to do our own test to ensure everything was working properly. After shifting up and down between all 21 speeds multiple time there was no noticeable issues. The Shimano shifter and drivetrain were able to easily switch gears and we were pretty pleased with the results. The shifting is a bit louder than we would have liked, however our test was inside in a small room which could have definitely contributed to the noise level. Additionally while these were Shimano parts they are somewhat lower end Shimano components which means they will perform very well but may have some slight draw backs, like the nosier shifting that we experienced.

After this was complete we wanted to test the bike’s actual riding ability, because clearly if you’re looking for a mountain bike the way it rides is the number one thing on your checklist. Our first test of the wheels, brakes, suspension and riding ability came on some city roads that were asphalt and concrete. Although this is a mountain bike, it is a beginner mountain bike and often that means that the people purchasing it are not extremely dedicated riders. As such the bikes beginners often buy will be multi-purpose bikes and we think it’s important for you to know how you bike will ride not only on a trail but on roads and sidewalks as well.

When riding on the street you could immediately tell that this was not a road bike however the difference was not quite as dramatic as it is for some mountain bikes. The wheels on the GT Aggressor Pro mountain bike are 27.5 inch All Terra tires and are decently hard. This means for someone looking to ride this bike in places other than a dirt trail the rolling resistance is low enough to allow you to do that without straining yourself too much. Many mountain bike tires are extremely soft so that they spread out and get as much traction as possible with the ground which is very important for intense downhill mountain bike. However, for an entry level bike like the GT Aggressor pro mountain bike, having slightly harder tires is great as it allows you to use your bike in a variety of locations while still being efficient and fun to ride. On the street the Tektro mechanical disc brakes did their job well after being adjusted by the Dick’s bike mechanic and while there will always going to be higher quality components we had no complaints about the brakes during our urban ride. Finally, the suspension. This is certainly not something to worry about when riding on flat roads but we did want to point out that the Suntour suspension was not so loose as to make riding difficult.

Trail Performance? You Bet It Can 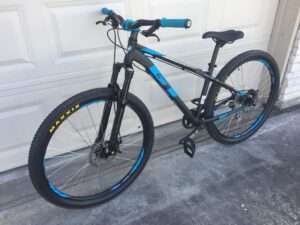 Now onto the review of the GT Aggressor pro in terms of its performance on the trails. First and foremost we need to point out that this bike is not designed to handle intense, rugged mountain biking. If you are looking for a professional, high-end mountain bike this is not that, however for entry level trail riding the GT Aggressor Pro performs admirably. As previously stated the wheels are a bit harder than some mountain bikes but that is not an issue on the trail. The paddles on the All terra Tires are properly placed and when combined with the control you get with 27.5 inch diameter wheels, you will have no problem navigating beginner to intermediate level mountain trails. The suspension was also middle of the pack but certainly sensitive enough to making our rides comfortable. We took the GT Aggressor pro out on some Southern California trails and while they were nothing incredible challenging there was definitely some rugged terrain. The Suntour suspension fork held up through all of our rides and easily handled the beginner trails that we threw at it. Although this suspension fork may be able to withstand some true downhill mountain biking we recommend this bike only for beginner and flatter intermediate trail riding. Next up is the drive chain and derailleurs which did not work quite as well as expected due to some chain dropping. When going over some mild terrain the chain frequently dropped and needed to be manually put back on. This is definitely not what you are looking for in a mountain bike however we were eventually able to fix this issue. More on the fix to this problem a bit later in the review. The last component we thoroughly looked at on the trails was the brake performance which did leave something to be desired. When going downhill the brakes didn’t work nearly as well as on flat ground however after taking the bike back to Dicks to be readjusted this problem was fixed.

Overall the trail performance of the GT Aggressor Pro mountain bike was definitely better than our expectations for an entry level mountain bike and its ability to function as a dual use bike further bolsters our opinion of it. There were certainly some issues however, such as the loose chain, and the somewhat ineffective brakes. Although we did get the bike adjusted when we first bought it, we were forced to bring the bike back into Dicks a second time to get these issues dealt with. This is not the biggest concern but you should be prepared to have your bike tuned up by their bike mechanic because there is a chance it is not done 100% correctly the first time.

Generally speaking the GT Aggressor Pro is a high quality entry level mountain bike that is capable of handling beginner trail riding as well as being a capable city bike. For the price you’re paying we believe that this is an excellent bike considering its performance and quality of components, however there are certainly drawbacks that you should be aware of for any entry level bike. The most prominent of these drawbacks include the somewhat inconsistent brake performance and the loose chain which frequently dropped on us during our trail test ride. Thankfully because this is a Dicks exclusive bike you are able to bring it in free of charge and have to completely adjusted and tuned up by their inhouse bike mechanic which we did. This fixed the majority of our issues and after two tune ups our GT Aggressor pro mountain bike rode near flawlessly. We would strongly recommend this bike to anyone looking to get into mountain biking or who wants to build our their collection of more inexpensive entry level bikes, however if you are looking for a more high-end professional level mountain bike there are certainly better options out there.

What size is the GT Aggressor mountain bike?

What type of bike is the GT Aggressor Pro?

Is the GT Aggressor Pro a good mountain bike?